Food, physical exercise and health – You may think that dieting is enough to gain health and regulate your weight, but is this really a good formula?

Those who have followed weight loss diets will know that once the target weight is reached and the type of diet is changed, it is normal to regain those dreaded extra pounds. Entering a vicious circle based on a ‘diet – rest – diet – rest’ rhythm carries certain health risks, since, in general, after abandoning ‘good habits’, regulate body weight and avoid regaining fat becomes a difficult challenge.

Studies show that cyclical weight changes – especially when these are greater than 4 or 5 kilos – produce the so-called “Yo-yo effect”, which significantly increases the risk of mortality, enhancing the possibility of suffering from ischemic heart disease and serious diseases such as different types of cancer.

On the other hand, it has been proven on multiple occasions that the best way to lose weight is by combining physical exercise and a balanced diet. Regarding this statement, the best nutrition habits are those in which no type of food is restricted and in which the consumption of carbohydrates prevails, associated with a lower calorie intake due to a higher fiber content and water.

It is not advisable to follow a strict diet, only to improve your eating habits.

In the same way, physical exercise is an extremely important factor in maintaining an adequate weight and improving health.

According to numerous studies, people with low physical activity are 64% more likely to have a heart attack.

Furthermore, the reduction in mortality has been related to recent physical activity, more than the past, provided that it is continued and is not abandoned. This information suggests that it is never too late to start exercising.

Similarly, it has been shown that doing sports three times a week is enough to improve our physical and mental health. In fact, people who exercise for a greater number of days do not obtain greater benefits.

The power of physical exercise on the human body and mind is beyond amazing. So much so, that sport is recognized as the best natural psychotropic drug, so that people who do not practice it tend to have more negative behaviors. In fact, 12% of cases of anxiety and depression are associated with sedentary lifestyles.
But sport is not only an ally against negative thoughts. Physical exercise also helps to end insomnia (if it is suffered), and practicing it in the late afternoon helps to improve psychological states of relaxation and therefore to fall asleep, especially if it is a water sport in which the temperature of the environment tends to be high.

We must remember that weight by itself is not a good predictor of health, since it has long been superseded by the Body Mass Index (BMI), which offers more precise measurements.

If you are curious about where you are, BMI is calculated as follows:

The scales are as follows: 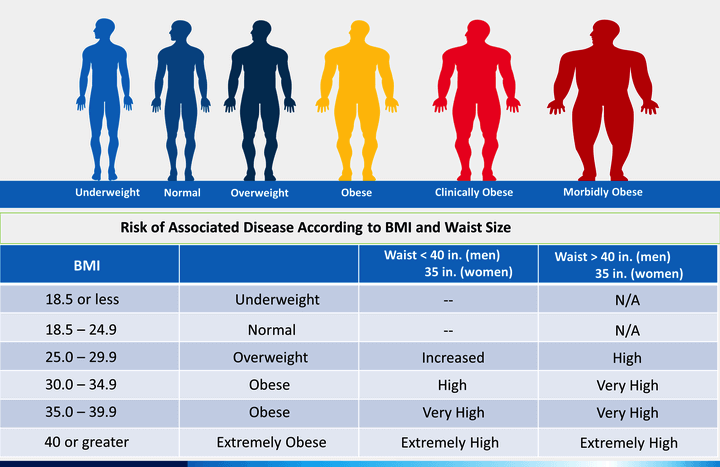 In addition, it is not only necessary to attend to the numerical data. To know well the state of health of an individual, it is important to take into account the distribution of fat in the body.

The accumulation of fat in the abdomen, for example, is the one with the greatest health risk. Studies show that people with a concentration of fat in this area are more psychologically, neuroendocrineally and cardiovascularly prone to stress than people with fat distribution in the hips.

In addition, a higher proportion of fat in the abdomen increases the likelihood of having misaligned lipids and, in the case of women, also increases the risk of breast cancer.

Therefore, according to the data provided, the negative effects caused by a combination of a lack of physical exercise and a poor diet, which includes following continuous diets, are evident, which can lead to serious physical and mental health problems .

The tools to stop this and remedy it are within everyone’s reach.

Trying to achieve a good state of physical and mental health through a complete, varied and balanced diet, as well as doing a little physical exercise, is always a safe bet.

Movember, the movement that fights for the quality of life of the male species

The most popular detox juices